I just submitted a update for KGTF for X-Plane 11. Awaiting for acceptance for inclusion in a future update. One runway had old designation preventing RNAV approaches. There were also numerous taxiways that needed correction. Even though it is awaiting approval, it can still be downloaded from the X-Plane Scenery Gateway. Pretty obvious that Grand Forks has seen some airport renovation since X-Plane was developed.

If you look closely you will notice a couple hangars at the north end are partially floating. This is because X-Plane does not flatten the airport Their terrain mesh needs to be improved. Even though we can flatten the airport, Laminar will not allow their designers to do so in anticipation of future terrain mesh improvement. Flattening the airport would also flatten the runways. Having the runways follow terrain mesh is, to me, a great feature. I have positioned those mentioned hangars in such a way as to minimize the float. Hey, after all, aren't we in this for accurate flight dynamics and runway, taxiway layout? After all, it is a "flight" simulator. I have great faith in the future of Laminar Research, much more so than for Microsoft. 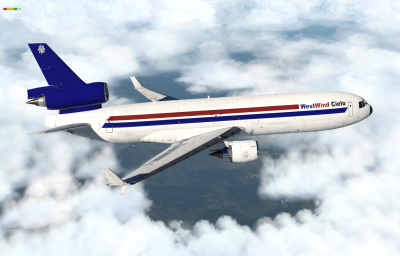